Mark Ortiz Automotive is a chassis consulting service primarily serving oval track and road racers. This newsletter is a free service intended to benefit racers and enthusiasts by offering useful insights into chassis engineering and answers to questions.  Readers may mail questions to: 155 Wankel Dr., Kannapolis, NC 28083-8200; submit questions by phone at 704-933-8876; or submit questions by    e-mail to: markortizauto@windstream.net  Readers are invited to subscribe to this newsletter by e-mail.  Just e-mail me and request to be added to the list. 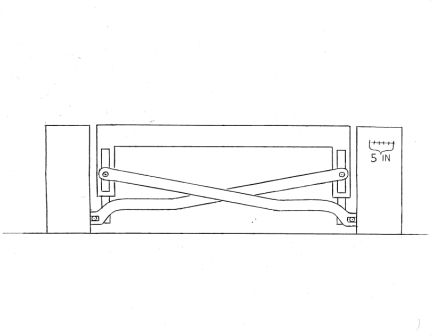 I recently ran across an interesting article that you may have seen, as it was in Racecar Engineering in 2001: http://www.locost7.info/files/suspension/dax/.  In your June 2008 Chassis Newsletter, you stated that "With a passive independent suspension, it is impossible to have zero camber change in both ride and roll."  This system looks like it does a good job of keeping camber very constant in both modes, and I was wondering your take on it, any particular upsides aside from the obvious camber advantage, and any downsides, weight being one of course.

I've started looking into ideas for building a car for the track.  I basically want a FSAE car, stretched for the higher speeds of a road course, with more power.  My target is 800 lbs, 175whp with a Hayabusa engine, which should be enough to give a good thrashing to the quickest cars that show up each weekend!  Without the luxuries of the large budget I'll have to minimize the CNC parts, so I'm looking to keep it simple and easy to fabricate for the build and future repairs.  Chassis will likely be square tube, things like that.  I'm leaning towards a monoshock on the front with a torsion bar for anti-roll, but I'm not sure if that will be up to the task on the rear until I do some numbers.  I saw that camber compensating suspension and wondered if it might be worth including, as every car needs a trick up it's sleeve...  I look forward to hearing your feedback on it, thanks!

As may be seen from the linked article, this system superficially resembles a conventional short-and-long-arm (SLA) suspension, and in fact is an optional fitment on the front end of a car that comes standard with SLA front suspension.  Unlike the SLA system, however, it mechanically interconnects the upper control arms in a manner that, in cornering, pulls the top of the outside wheel inboard and pushes the top of the inside wheel outboard, providing more camber recovery than the SLA would be able to generate.  Indeed, it can have 100% camber recovery in roll, just like a beam axle does (ignoring the component of roll due to tire deflection) – or even more than that if desired.  It can, at the same time, also have no camber change at all in ride, again like a beam axle – or if desired, some moderate amount of camber change in ride.

First, they do not have the same camber properties with respect to the sprung mass in both ride and roll.  Second, when there is vertical displacement of only one wheel of the pair, and not the sprung mass, the wheel not displaced vertically undergoes camber change, and usually some lateral displacement or scrub at the contact patch.

There is no generally agreed convention regarding how such systems should be classified.  They are generally not found on vehicles produced in large numbers, except perhaps if one includes twist beam suspensions in the category (I would do so).  I would term this class of systems either hybrid or semi-independent suspensions.  I would therefore stand by my earlier statement about the limitations of passive independent systems.

But semantics aside, what are the possibilities and limitations of these hybrid or semi-independent systems?  Are they worth pursuing?  Are they mere reinventions of the beam axle, with different appearance and more parts, or do they offer possibilities not available with a beam axle?

First of all, most semi-independent systems package more like independent systems than like beam axles.  We don't have to make room for a beam across the car which needs a lot of space around it so it won't hit anything as it moves.  Even a twist beam generally needs less space than a true beam axle.  Some semi-independent designs connect the upper control arms using hydraulics rather than links.  These offer the greatest packaging flexibility, at the expense of added complexity and vulnerability to leakage, cavitation, unintended damping effects, and other ills associated with hydraulics.

Unfortunately, in one packaging-related respect, semi-independents with good camber recovery in roll resemble beam axles more than independents: they need a big wheel well, assuming the car has fenders.  Depending on the combination of displacement at the two wheels, the top of the tire can assume a fairly wide range of positions with respect to the body, and the wheel well must accommodate this.  With an independent system, the spatial envelope needed to enclose the top of the tire is generally considerably smaller.  For an open-wheeled car such as the questioner is contemplating, this is only a factor immediately inboard of the upper portion of the wheels, and it is usually easy to provide ample room there.

A beam axle generally provides zero scrub (zero track change) and zero camber change in ride; 100% camber recovery in roll due to cornering (again, ignoring effects due to tire deflection); and considerable camber change and scrub in roll due to bumps.  Some variations may include an axially and/or torsionally compliant slip joint in the beam, and these may have some scrub in ride, and may also have more or less than 100% camber recovery in cornering, but such designs are fairly rare.

Many semi-independent designs can be configured to have a little camber change and scrub in both ride and roll, and lower roll centers than are commonplace with pure beam axles.  Whether this actually makes the car faster or more pleasant to drive than it would be with beam axles probably depends on road or track conditions, but the design flexibility can probably be regarded as an  advantage, rather than a minus.

Sent with this newsletter is an inventor's sketch of a semi-independent design superimposing one traditional suspension configuration on another, the two acting in series.  The system that directly connects to the wheels is similar to a Ford truck twin I-beam layout (modified swing axle).  The system that connects directly to the sprung mass is a sliding pillar configuration, roughly as used on Morgans.  Inventor Gil Scigalski of Illinois sent me a description, and asked for a free opinion, agreeing that the material could be used for publication.

In its general layout the design resembles a Ford Twin I Beam suspension, but with the characteristic long overlapping swing axles pivoting from unsprung rather than sprung parts of the vehicle.  The unsprung parts consist of vertically aligned chassis mounted struts similar to the sliding pillars used on Morgan sports cars.  In addition to transversely locating its associated swing axle, each strut also connects to and moves with its opposite axle via a slot formed therein.  Each slotted connection accommodates the lateral difference between the vertical path of the strut and the arching path of the swing axle during jounce-rebound.  Longitudinal location and springing-damping of the swing axles are not shown but inferred and accomplished by means known to the art.

After pondering this layout for a while, I have concluded that it is roughly equivalent to a beam axle with a Panhard bar or other lateral locating mechanism at the height of the swing axle pivots.  Or more precisely, it is equivalent to a slip-jointed beam axle, with its ends hung on sliding pillars or trailing arms and a roll center at the height of the swing arm pivots.

The inventor claims that the suspension will completely eliminate roll, up to the point of tire breakaway.  Actually, tire breakaway or no, it will generate geometric anti-roll, but not 100% unless the roll center is raised to unsprung mass c.g. height.  As with a beam axle, this will result in large amounts of scrub on one-wheel bumps.  The inventor is correct that the system eliminates the jacking that would be encountered when trying to achieve anything like 100% geometric anti-roll using pure swing axles or any other independent system.  But again, this merely duplicates what a beam axle can do.