This month I am presenting some correspondence regarding a proposed warp-soft interconnected suspension.  The inventor has consented to publication, in exchange for my not charging him a consulting fee.

The inventor sent me two illustrations, referenced in the text.  I will attach these separately.

I have long been fascinated by the principles of front-rear interconnected suspension systems. I have developed several theoretical designs over the years, and shall hopefully have the opportunity to build a working vehicle incorporating such a system some day. The focus of my thinking tends to be on high-performance road vehicles.

I have two questions, the latter of which arises from the former:

1. Having devised an arrangement of mechanical links to effect front-rear interconnection of roll resistance independently of bounce/heave/pitch motions, and subsequently calculating the spring rates necessary to achieve the desired roll angles, the question arose whether it was necessary to retain any overall roll compliance whatsoever. My concern was primarily about ride comfort, as though the front and rear axles might be sprung fairly softly a component of any single-wheel bump would still be felt as either a small lateral jolt or a small rotation about the roll axis, or both. And it occurred to me that this was likely to be so unless my roll-control springing were so soft that the desired roll angles could not be achieved; and if that were the case, why not dispense with roll-control springing altogether? That would certainly allow the interlink system to be much simplified, which is always good.

I know that some roll would remain due to deflection of the tyres. I am aware that Citroën built an SM with an experimental zero-roll suspension around 1970, which was by all accounts dynamically successful. I have also had some correspondence with the inventor of this system: http://www.cairosuspension.co.za/. It is a hydraulic system which eliminates overall roll except that

arising from tyre deflection, but being oriented at low-speed off-road vehicles the inventor did not consider the effects of the front-rear distribution of lateral weight transfer. I suggested to him that the handling balance of his personal Land-Rover, though it is already far superior to stock, might be made tuneable by making the spring base on at least one axle adjustable. So it seems to me that people can and do live with suspension systems that do not allow any roll except that arising from tyre deflection.

I have heard some talk about a bit of roll being desirable for driver feel, but I am not convinced that the inner ear can distinguish between (at least steady) roll and lateral acceleration. I cannot see the visible horizon having much influence except in extreme cases. My own experience is that it is more about feeling steering weight/feedback against lateral and yaw acceleration. That's why I don't like power steering.

My question is, how good an idea is zero-roll really? Given that I can a) achieve zero warp stiffness, b) control overall roll independently of other suspension movements, and c) distribute front-rear weight transfer through the geometry of the interlinkage, do I need to incorporate overall roll compliance? Can I go ahead and make those links solid, or is there something I am missing entirely?

2. Provided the zero-roll solution is viable, how does this alter our approach to camber recovery? Would it become more practical to use systems like pure trailing arms, whose lack of camber recovery makes them less desirable in many instances for conventional suspension? If all overall roll arises from tyre deflection, surely the suspension geometry is irrelevant to the resulting camber change? And in the case of single-wheel bumps, surely the probability of any given camber change being desirable would tend to be equal to the probability of any other camber change - or no change at all - being desirable? - especially if the changes in question aren't extreme?

I am thinking of my Morris Minor, where the conventional wisdom is to reduce understeer by increasing front roll stiffness, contrary to theory, because reducing roll overall reduces the camber change at the front. Can one take this a (large) step further?

Your thoughts on this would be much appreciated.

Briefly, I don’t think it’s necessary for a car to have suspension roll for the driver to feel when the limit of adhesion is reached or approached.  You can certainly feel it just fine on a go-kart.

However, making the suspension completely rigid in roll would probably compromise roadholding as well as comfort.  Sometimes road irregularities deflect both wheels on the same side in the same direction.  I would also have to see how you’re managing front/rear lateral load transfer distribution, before I could say if you’re actually achieving good control of that or not.

Roll due to tire compliance would produce camber change equal to that roll component, as usual.

I've attached some simplified illustrations of the sort of mechanisms I have in mind. Image ML01 04d.jpg shows a very simple iteration of the concept, with solid axles front and rear (blue) and a single spring (red) acting on each. The interconnection is by pullrods and bell-cranks (green) acting on intermediate members (yellow) which pivot about a ball-connection to the vehicle structure. In bump/pitch these members rotate about an axis through the ball-connection and the bell-crank links; in roll/warp they follow the rotation of the respective axles.

Note that not all axle location is shown. The yellow members do however serve as axle lateral locating devices. Moreover the location needn't be by a ball joint and thus limited for roll centre location; it could be by links describing an instant centre etc. There are hundreds of possible elaborations on the basic concept in the image, including some which involve independent suspension.

You will notice that the system articulates freely in warp. The ERMD is determined by the leverage of the bell-cranks. It is proportional to the attitude the vehicle adopts at rest relative to the angle between the front and rear axles.

Hitherto the pullrods have incorporated some sort of stiff tensile spring to allow a bit of roll compliance. My question to you is, how bad would it be to lose these springs altogether, and have the pullrods solid as shown? How badly would the system be compromised? Would the result be a death-trap or could it be an imperfect but fun little runabout?

The other image, SPRING BASE.jpg, shows another effect of the intermediate member, of which I have of late almost forgotten: if the bell-crank pivots on the intermediate member are not in line with the pivot to the vehicle structure but somewhere nearer the axle, the pullrods would be subject to some bump/pitch input, depending on the leverage in side view. As long as this remains greater than the leverage in end view the result would be as if the spring base were greater than the track. This tends to the classic 2CV situation where the combined bump stiffness is greater than the pitch stiffness - as you explained in a past newsletter - but combined with amplified overall roll stiffness.

Such are speculations of this kind that even your preliminary comments have given me much food for thought: thank you. I think you have already convinced me to retain some roll compliance, though if you are agreeable, an explanation of why would be educational.

The system as you’ve drawn it would not be rigid in roll.  If the bellcranks were attached to the axles, then it would be.  As drawn, the yellow anti-roll bars resist roll but not warp, but they do not resist roll rigidly unless they are very fat.  This is equivalent to what was done on rally cars under the

Kinetic patents, via hydraulic interconnection of the anti-roll bars.  Your car would have roll resistance dependent on the rates of the yellow bars, which could be as soft or stiff as desired.

This illustrates the principle that any simple interconnection of wheel pairs (such as an anti-roll bar) stiffens two of the four modes, and any interconnection of such interconnections produces stiffening of only one mode (not purely true in real-world applications due to differing rates and motion ratios, but substantially correct).

Regarding your second drawing, I’m assuming that’s a top view, and the U-shaped piece is intended to be rigid.  You are correct that this could give the springs – and dampers if you use coilovers – a greater spring-to-wheel motion ratio in roll than in ride.  However, the motion ratio would not be more than 1:1 in roll, as if the springs were outside the wheels.  In terms of springing, using an anti-roll bar does the same thing, but the layout you’ve drawn also allows damping that’s stiffer in roll than in ride.  A somewhat similar effect can be achieved with a beam axle more simply, by mounting coilovers well above the roll center and inclining them steeply.  However, that approach has greater limitations than your system in terms of available motion ratios, and also inevitably produces a falling motion ratio in ride.  Your idea, or some variation of it, might also be applicable to independent suspension.  Motion ratios could also be increased by adding pushrods and bellcranks, although the system then starts to have a lot of pieces.

The yellow members are indeed intended to be pretty much rigid. I had something like a 3" hollow tube in mind.

Okay.  You can make them that way, or make them any stiffness you want, to tune the system as desired.  This means you don’t need any additional complexity to have some roll compliance.  The links connecting the bellcranks can still be rigid.

If you don’t have roll compliance, maybe that means you don’t need to damp roll either, but you probably should have some damping in warp anyway, even with no suspension roll and no resistance at all in warp, if you want to use the vehicle at high speed.  Otherwise I can imagine getting warp oscillation of the unsprung components on the tires.

With beam axles, suspension roll does not affect camber.  That’s why any increase in roll resistance, even front roll resistance, will sometimes reduce understeer in a car with little camber recovery in roll at the front and good camber recovery at the rear.  Except in tall vehicles, there isn’t much to be gained from reducing roll if the vehicle has beam axles at both ends, at least in terms of steady-state cornering.  With independent suspension, it is much more important to reduce roll, as it directly affects camber control. 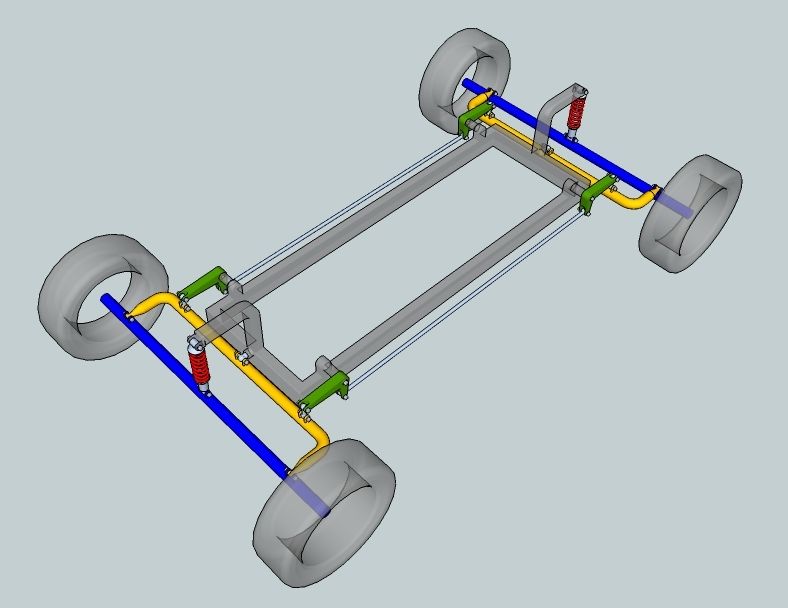