Mark Ortiz Automotive is a chassis consulting service primarily serving oval track and road racers. This newsletter is a free service intended to benefit racers and enthusiasts by offering useful insights into chassis engineering and answers to questions. Readers may mail questions to: 155 Wankel Dr., Kannapolis, NC 28083-8200; submit questions by phone at 704-933-8876; or submit questions by e-mail to: markortiz@vnet.net. Readers are invited to subscribe to this newsletter by e-mail. Just e-mail me and request to be added to the list.

Last month we discussed F1 control arm angles. This question from a reader relates to that. Additionally, after more examination of photographs of the 2004 Williams, I need to correct a misconception held by this reader, and, until recently, by me.

With regards to the recent discussion about the F1 control arm angles, could they be using the “negative” swing arm to achieve a below-ground roll center?  I suppose there are arguments for both below-ground and above-ground roll centers at the front – seems to be a preferential design variable.  I notice that the Williams does not droop limit (observation during pit stops) [The questioner means that the car does have some droop travel from static ride position, although not necessarily to the point where the springs completely unload.], so the geometry would be susceptible to lateral migration of the front roll center in roll, though with modern design tools this can probably be optimized.

I am inserting the questioner’s photo on the next page. It shows the Williams front end , from the front, with the car on stands, wheels off, and suspension at full droop. The appearance is that the upper and lower control arms are approximately parallel in this condition, and both are lower at the outboard end than they are where they attach to the tub. 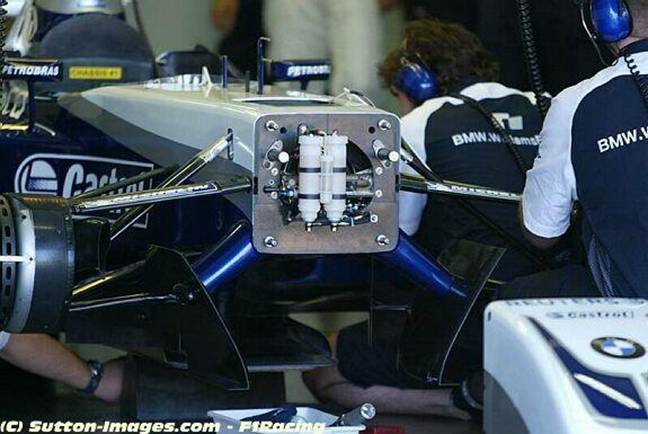 NOTE: Reproduction of copyrighted image constitutes fair use here because this newsletter is free.  Any one engaging in reproduction of this material for sale please contact Sutton Images regarding rights.

I hestitate to attribute a car’s racing record to any single observed design feature, because I know that results come from the whole package. However, even with the modest amounts of suspension movement seen in F1, significant bump steer can’t be good. If the bump steer characteristics are what they appear, that could easily explain the team’s difficulties making the car work this year.

Looking at other aspects of the geometry, it is evident that the length of the front view projected control arm is shorter for the lower arm than for the upper, which is unusual. I am certain that the reason for this is aerodynamic, not mechanical. The designer has chosen to compromise suspension geometry in pursuit of aerodynamic efficiency, particularly that of the center portion of the front wing. The idea is to get all aerodynamic obstructions in line with the “tusks” that carry the front wing, and have as large a clear region as possible aft of the wing’s mid-section. For an F1 car, there is a rational case for ordering the priorities this way.

That said, what are the mechanical effects of having the lower arms shorter than the uppers?

First off, it’s not good but it’s not a disaster. Practically every strut suspension in the world approximates a short-and-long-arm system with a long upper arm and short lower.

We do get large changes of force line slope with suspension movement. (Force line is my term for the line from contact patch to instant center.) The roll center, when defined in the customary way as the front view force line intersection, can move around quite a bit.

Some may say this is heresy, but actually there is widespread recognition in the automotive engineering community that the whole notion of roll centers needs to be re-thought.

Full discussion of the issue is impossible in a document the size of this newsletter. My video “Minding Your Anti” ($50.00 from me, shipping included) explores it in depth. We can cover some basics here, however.

The magnitude of these jacking forces depends on two things: the slope of the individual wheel’s force line, and the magnitude of the lateral force acting on the contact patch. This means that the amount of overall anti-roll or pro-roll moment from a wheel pair depends not only on the control arm geometry but also on the tire loadings, cambers, and slip angles. Change the anti-roll bar stiffness or the springs, and you not only change the elastic, or spring-derived, component of the roll resistance, you change the geometric component as well because you change the wheel loadings.

The effects we are discussing here are sometimes called “lateral anti” effects, because they are directly analogous to anti-dive, anti-squat, and anti-lift effects in side-view suspension geometry.

Even the force line slopes don’t matter as regards any tendency toward roll resulting from car-vertical forces.

There is a way to assign a roll center height for modeling and discussion purposes that takes account of these realities. The video explains how to do that.

Anyway, returning to the question of what happens when we have the lower arms shorter than the uppers, if the arms are all horizontal when roll is absent, as approximated by the Williams, then in the unrolled condition, neither the inside nor the outside wheel has any anti-roll or pro-roll. As the car rolls, the outside wheel acquires rapidly-increasing pro-roll (downward jacking), and the inside wheel acquires rapidly increasing anti-roll (also downward jacking). Since the outer wheel generates a progressively larger share of the lateral force as we corner harder, we can confidently say that the net result is pro-roll for the wheel pair, increasing relatively rapidly with increasing roll. We may model this, or think of it, as a roll center that is at ground level to begin with, and drops relatively rapidly as the car rolls.

As for camber properties, in roll the outside wheel starts out with a camber recovery rate of zero (wheel tilts out of the turn an amount equal to roll angle) and gets worse from there – in other words, the camber recovery goes negative (wheel tilts out of the turn an amount greater than roll). On the inside wheel, camber recovery starts at zero and improves from there. In ride, camber goes toward positive in both bump and droop. Of course, any static or initial camber value will be superimposed on these effects. And again, the foregoing discussion assumes an initial condition where all arms are horizontal.

CLUTCH USE WHEN DOWNSHIFTING

In the July 2002 newsletter, we explored the question of whether to downshift while braking for a turn. I pointed out that we really can’t do it any other time, since we need the car in the proper gear for the turn as soon as braking ends, and we generally can’t downshift it before we get it slowed down.

A letter in the February 2004 Racecar Engineering notes that it is not common anymore to double-clutch, or double-declutch as they say in England, while heel-and-toeing to match revs while downshifting. The writer asks whether there is actually any penalty or benefit to letting the clutch pedal up while matching revs.

Normally, the reason for doing this is to match the speed of the meshing parts inside the gearbox, and thereby reduce wear in the box, especially to the dogs or synchros, as opposed to merely getting a smooth-feeling shift that won’t upset the chassis or break the tires loose.

To some extent, it depends on the type of clutch and gearbox. Many multi-disc racing clutches drag a bit even when released, and if that’s the case and the rotating parts are light, it may not matter much if the clutch pedal is up or down while the revs are being matched.

If the gear ratios are close, the mismatch in revs without double-clutching is less than if the ratios are widely spaced.

The situation where double-clutching is perhaps the most beneficial is with a wide-ratio transmission, or a skip-shift (two gears at once) with a close-ratio box, and a single-plate clutch that does not drag at all when released.

I think rev-matching is definitely beneficial with both dog and synchromesh boxes. I can’t think of any reason it wouldn’t be desirable in terms of gearbox life.

Another option popular with some drivers, particularly with dog boxes, is to not use the clutch at all. If done right, this can work quite well, but the consequences can be relatively severe if the driver misses the rev match. Clutchless shifting does have the advantage of allowing left foot braking. This permits a quicker transition from braking to power, at least in theory. It also offers an advantage in speed of response with a laggy turbo motor. The driver can feed the engine some throttle before getting completely off the brakes, and thereby help the turbo get spooled up.

It is also fairly common to upshift clutchless, and use the clutch, either once or double-clutching, for downshifts only.