Attached to this email is a photo of a northeastern modified in a turn at Fonda speedway in NY by my son. [inserted below]  He has chosen artistic expression with a camera as his life's passion over his father's preoccupation with physics and chassis dynamics in particular and race car engineering in general.  Most days I think he is the smart one.

If you would please look at the photograph and in give me a verbal assessment as to what is occurring dynamically with this car at this instant in time I would appreciate it.  I will withhold my thinking at this time as to not muddy up the water.  You may use this photograph as well as your assessment in your newsletter.  The only bit I'll add is that this chassis attitude, on this car, in this location of the track is the same almost every week and it carries this mode over a considerable distance along the corner –  i.e. this is not a quick snapshot of the phenomenon; the car maintains this attitude over a certain length of time. 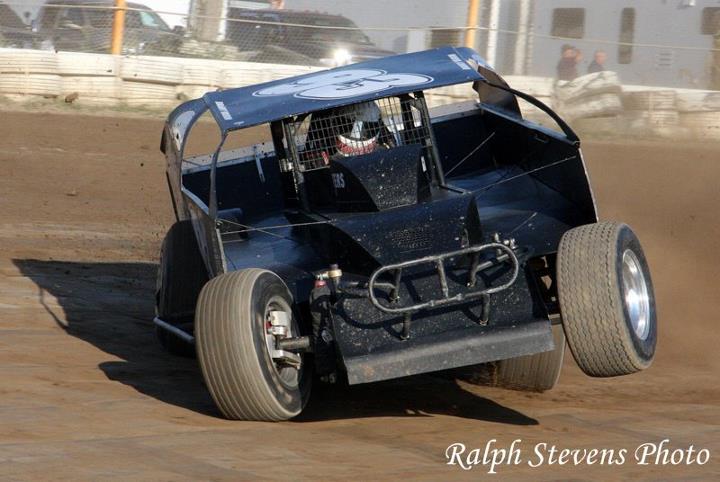 The picture shows a DIRT-style Modified, cornering in a powerslide, with the left front wheel high in the air, a large roll angle, and the rear wheels visibly aimed to the right.

I can tell that the car had maintained the attitude for some time when the picture was taken; the left front wheel has stopped turning.

This means the rear tires are as equally loaded as possible under those conditions, and consequently the car should be tight.  The exaggerated rear steer is needed to counter this effect.

Really, we can’t tell from the picture whether the car is tight or not.  It’s in a state of obvious oversteer.  The rear slip angles are greater than the front, even after allowing for the roll oversteer.  But we don’t know if the car does this on its own, or if the driver is “driving a tight car loose”.  One has to talk to the driver to find out.  I have many times seen vehicles on dirt tracks corner outrageously sideways, more so than their competition, and had the drivers tell me their vehicles had a push.  What’s happening in such cases is that the driver is pitching the car on entry, and then horsing the tail out with the throttle, simply because if driven any other way the car won’t rotate at all.

The car is exhibiting a design and setup strategy that first became popular in dirt Late Models, and has since become fairly common in the lower-cost IMCA-style Modifieds as well.  Part of the strategy has even been in the news lately in relation to upper-division NASCAR pavement cars.

There are basically two elements to the strategy.  The first is to aim the rear wheels out of the turn, either statically or dynamically, or both.  Doing this statically is what has been recently tried on Cup cars, and has now been limited by NASCAR in a mid-season rule change.  The second element, mainly on dirt cars, is to make the car “hike”: make the left rear jack dramatically, typically in response to both lateral and longitudinal force.  The rear suspension is set up with large amounts of thrust anti-squat, especially on the left, and with a beam axle this concomitantly produces a lot of roll oversteer.  Most commonly, there are two trailing links per side, attached to the axle with rotating brackets called birdcages.  The links are not extremely long.  The axle ends move in a path that is both sloped and curved.  The wheels move rearward, at a decreasing rate, as the suspension compresses, and they move forward, at an increasing rate, as it extends.

Typically, there is also a short, steeply raked Panhard bar on the left side of the car, which jacks the left rear up in response to lateral force.

The result is that even on a dry slick track, the car will jack the left rear up so much that the left front tire will come off the ground.  This would normally make the car push like a pig, but the exaggerated roll oversteer at the rear is used to kill the push.

It is not uncommon for the hiking effect to use up all or most of the suspension travel at the rear, in compression at the right rear and extension at the left rear.  This leaves the suspension with little ability to absorb bumps.

Does this make sense?  From the standpoint of tire and suspension dynamics, it doesn’t.  It makes more sense to have only as much dynamic wedge as it takes to balance the handling, with the tires and car construction the rules permit.  Hopefully, we will still have some travel left in the suspension to absorb bumps, and some ability to vary the amount of dynamic wedge to control the car’s balance.  The left front tire will still probably be the most lightly loaded of the four in many cases, and will

contribute the least to the total cornering force, but what’s the sense in throwing that away and turning the car into a tricycle unnecessarily?

Yet there is a long history of popularity for this approach, and cars using it have won a lot of races.  What might be the reason?

It could have to do with aerodynamics.  In the case of the Cup cars with the axle snouts aimed to the right, that’s undoubtedly the case.  It used to be standard practice on all but the fastest tracks to work the body rules by moving the tail to the right, relative to the rest of the body.  This got more air to the rear deck and spoiler when running at some leftward yaw through a left turn.  But in recent years this has been prohibited, or severely limited.  A similar effect can be had by simply yawing the whole car by aiming the rear wheels rightward.

Not only does more aerodynamic yaw get more air to the rear deck and spoiler, thereby generating more downforce, but it also generates an aerodynamic lateral force.  This is maximized when the car has extremely slab-sided bodywork.

Hiking the left rear also lifts the spoiler higher.  It would be possible to just have it higher statically, but the rules restrict that.

Rather similarly, it would be possible to statically lead the left rear a lot, but the classes we’re talking about have rules limiting wheelbase inequality on the two sides of the car.  It might be possible to get around this by moving the left front wheel ahead of the right front.  However, the engine setback rules often (though not always) specify how far the nearest spark plug can be from the left front upper ball joint.  When this is so, we can’t move the left front wheel forward; we can only move the right front back.  The only way to aim the rear wheels to the right without losing engine setback is to make them steer that way dynamically.

Having the car rolled a lot also should get us some downforce from the lateral component of the airflow.  On the other hand, especially in a Late Model with a full-width front end, having the left front corner high costs us downforce by letting more air in under the left front.  Whether there is a net gain in downforce, or exactly when there is or isn’t, is not known.

Why?  Because it is not easy to test this in existing wind tunnels.  Most teams involved in dirt racing don’t have the budget for wind tunnel testing anyway, but even if they did, most tunnels will not accommodate the yaw angles required.  The belts or wheel support rollers won’t accommodate the required wheel positions.  Most tunnels aren’t big enough to accommodate the aerodynamic front-view width of the car when yawed dramatically.  Blockage effects would result which would compromise the accuracy of the testing.

It might be possible to try to model and mesh a dirt Late Model and apply computational fluid dynamics (CFD) to the problem.  But that’s not cheap either, at the level that would be required.

One possibility might be to instrument a Late Model, and adjust the suspension so it would run in various hiked and yawed positions when running straight on smooth pavement, and measure the suspension displacements with various setups.  Aerodynamic forces might then be inferred from that.