In this instalment, we analyse the stability of a single wheel, a bicycle, tricycle, and, finally, of a four-wheeled vehicle. In the offing, we introduce force moments, vector cross products, matrices and linear algebra, and some interesting facts about how the number of wheels on a vehicle relate to the number of dimensions of space and to the practice of weight jacking on a race car.

Consider a single bicycle wheel and tyre combination, all by itself, just standing on the ground. Call it a unicycle wheel. It almost immediately falls over. The reason is that its centre of gravity (CG) is above the ground, but its contact patch (CP) is ON the ground. Assuming that the CP doesn't slide, then the ground will resist any force put on it with an equal and opposite force. If the wheel begins to tip ever so slightly sideways, Earth's gravitation, pulling on the CG, and the reaction force, pushing mostly up and a little sideways on the CP, conspire to twist the wheel even more sideways down toward the ground. In other words, if it tips over just a little, it will have an overwhelming tendency to tip over ALL the way. The following figure shows the wheel precariously balanced on its CP:

The next figure shows the wheel just starting to tip over. One can easily see that the weight, pulling down on the CG, and the reaction force, pushing up on the CP, will quickly knock the wheel down to the ground. At any instance of time, the tendency for the wheel to fall over is measured by the moment of the forces about some arbitrary point. The moment of a force about a point is the magnitude of the force times the perpendicular distance of the force line from the point. We suggest this perpendicular distance in the following diagram with a small right triangle. Since the CP is not sliding, by assumption, it's fixed in inertial space and is an ideal candidate for a moment centre: the point about which to compute force moments. There is also a small, sideways component to the ground's force on the CP, but we ignore that in the diagram.

More generally, the moment of a force vector can be thought of as a vector in its own right (at least in three dimensions, it can the story is more complicated in four or more dimensions). This vector is the cross product of the moment arm and the force vector. The moment arm is a vector drawn from the moment centre to the point of application of a force. In the diagram above, the moment arm of the gravitational force is along the hypotenuse of the little triangle and points upwards. The cross product of a moment arm, r, and a force, F, is defined to be a certain vector that is perpendicular to both r and F. There are lots of vectors perpendicular to both r and F if r and F are not collinear, and there are NO vectors perpendicular to both of them if they are collinear. In any event, we're looking for the particular one that satisfies some properties. Suppose r has components (rx, ry, rz) and F has components (Fx, Fy, Fz). Let the vector we're seeking be T. The conditions that T be perpendicular to r and to F can be written as follows (assuming you understand the much-simpler inner product or dot product of vectors-if not, take a search for " inner products" at http://www.britannica.com/, for one of many Internet sources):

It's easy to check that the following vector satisfies these two equations in three unknowns:

It's a little more subtle to check that the magnitude of T, written

, is the magnitude of r times the magnitude of F times the sin of the angle between them in the plane they form. My favourite method is to do the calculation in that plane, where it's easy, then to assert that nothing in the result depends on the orientation of that plane in 3-space, so the answer must be the same after the plane is rotated into any arbitrary orientation. For the masochist, it's possible to prove by grinding through all the algebraic arithmetic that

Furthermore, the cross product we need satisfies the right-hand rule, whereby r, rotated into F by a right-handed twist, as though by turning a right-handed screw or faucet handle, would advance the screw in the direction of T. The opposite product, F

r, would have the opposite sign. There are many more interesting properties of the cross product, for which we refer you again to http://www.britannica.com/.

Let's go back to our unicycle wheel. Generically, a physical system is unstable if small inputs lead to large outputs, say, if ambient forces amplify little disturbances. The fact that our wheel falls over with just the slightest disturbance, almost by itself, indicates that the one-wheel system is unstable. By the way, a wide race tyre will not tip over by itself until it's pushed sideways far enough that the line of the gravitational force vector lies outside the edge of the tyre. At that point, the restoring force, pushing up on the edge of the tyre, can no longer counteract the tipping-over, twisting tendency of gravitation. A complete, ride-able unicycle is even more unstable than a unicycle wheel, because a rider must also keep himself from falling backwards or forwards by continuously adjusting pressure on the pedals. A ride-able bicycle does not suffer forward-backward instability since the CG is between the front CP and the rear CP. However, it does suffer left-right instability, and the rider must continuously adjust body weight and steering input - which generates sideways restoring force - to keep the bike from falling over. Going from one wheel to two wheels eliminates one form of instability. How about going to three wheels?

A tricycle is optimally stable. It will sit still without tipping over, and its stability in steady-state motion is almost exactly the same as its static - or standing-still - stability. It takes a large disturbance to knock over a tricycle. It will tend to come back down on its wheels even after becoming partially or completely airborne, so long as the CG stays within the bounds of the triangular outline of the CP's projected vertically on the ground (see the following figure): 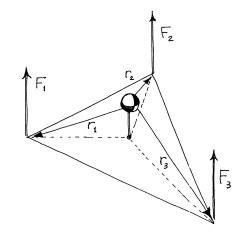 The stability of a tricycle is reflected in the mathematics to solve for the normal forces on the contact patches when the tricycle is still or in steady motion in a straight line. Briefly, if the tricycle is NOT tipping over, the sum of the moments of the normal forces must vanish (the choice of the moment centre is arbitrary, but the CG is convenient because the weight has no moment about the CG). With reference to the preceding figure, we have the following vector equation:

Since the forces are normal forces, they have only Z-components - that's what " normal" means when speaking of forces. The cross products are quite simple, then, and work out to be

for i = 1, 2, 3. Furthermore, we know that the forces must add up to the weight, W. We now go into the language of matrices and linear algebra to present the solution (you know the drill: go to Britannica if you're not comfortable), and, in the interest of space, we omit the intermediate arithmetic, which you may check on your own. We may write our equations as

This set of equations has a solution if and only if the determinant of the square matrix is nonzero. This determinant is

which will vanish if all three y components of the moment arms are equal, or, for that matter, if all three x components are equal. In other words, it will vanish if the three points of application of the forces are collinear, in which case we have three wheels in a line and we might as well have a bicycle as to stability. In any event, the solution turns out to be

Obviously, there is no solution if d, the determinant, vanishes. It is an interesting exercise to find out all the geometric circumstances in which one or more of these forces vanish or to catalogue all the possible ways in which the determinant can vanish. I will leave these exercises to the reader. Before leaving the tricycle, I'd like to assert without proof that the fundamental, geometric reason we can solve for the normal forces is that ANY three points define a plane. No matter how the tricycle is positioned on any (sufficiently horizontal) plane, all three wheels will touch the ground and three normal forces will be generated.

We now take a huge risk and generalize TWO aspects of the model at once. First, we go to four wheels. Second, we tilt the plane upward by a small angle

and bank it by a small angle

. Going to four wheels will cause our equations to break down because there is TOO much symmetry in the vehicle and blind application of linear algebra cannot derive, unambiguously, how the normal forces are to be apportioned among the wheels. Four points cannot lie on a plane unless they are exquisitely balanced there. We restore sanity by expressing the desired symmetry explicitly, and this makes for a bit of interesting math. Physically, in a four-wheeled vehicle with a suspension, it is very easy to load wheels preferentially by jacking the springs up or down. NASCAR crews are often furiously spinning wrenches above the rear wheel purchases in the pits, effectively jacking weight into or out of wheels to adjust handling. In a three-wheeled vehicle, weight jacking is not possible, to first order, that is, so long as the CG does not tip appreciably. Playing around a little with the spring heights on a tricycle will not affect the weight on each wheel.

Elevating and banking the plane further complicates the math by adding angle terms to the moment arms or to the forces, depending on point of view (we go with the latter). We turn on the fire hose, here, because it would take several instalments to go step-by-step. We just state the math and leave it to the adventurous reader to check it. First, a diagram: 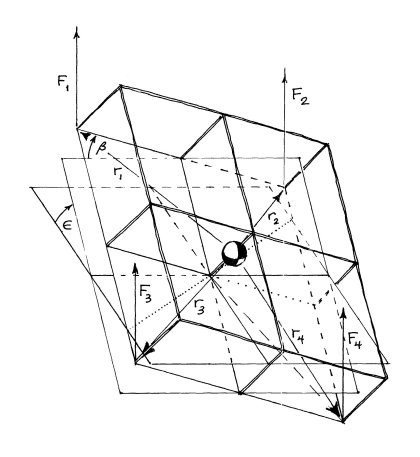 The four torques are too long to write out. We're really only interested in their sum, which works out to be the following 3-vector:

and where we have replaced a + b + c + d with mg, the weight of the car, expressing force balance. We now have three equations in four unknowns, so we cannot solve without more information (in fact, the 4-matrix written out similarly to the tricycle example has a symbolically vanishing determinant-not good for physics, but it is the interesting mathematical point). Symmetry constraints are a typical way to add information, and a good symmetry is that the ratio of the two rear forces should equal the ratio of the two front forces, or ad = bc, expressing the circumstance that we have NOT jacked any weight into the car. As an intermediate step, we can solve the original set of equations for a in terms of b, c, and d, yielding

We can go one more step by solving for b in terms of c and d by setting the torque in the PITCH, or y, direction to zero, yielding

Writing out our symmetry equation and substituting the solutions for a and b above, we get (after a distressing amount of grungy grinding)

We've gone on long enough in this article. We'll leave it to a later instalment or to the reader to work with some numerical values and plots.