One of the concepts in Engine Science 1 was Volumetric Efficiency. This relates to a very basic principle with engines: the more fuel your engine can effectively burn during the power stroke, the more power it will produce, but how does this relate to performance engine parts

Don't run out and put great big jets in your carburetor hoping to make more power. For the fuel to burn effectively it must be mixed with the proper amount of air, which is a result of carefully selecting your engine's performance parts.

As explained in Engine Science 1, superchargers and turbochargers increase engine power because they increase the volumetric efficiency. These devices compress, or pack, more fuel and air into the engine's cylinders.

The opposite of this condition can also true. If the intake system on your engine restricts the amount of air and fuel that reaches the cylinders, then your engine will make less power.

The bottom line is: anything that will induce more fuel and air into the cylinders will help the engine create more power. However, some configurations will increase the quantity of air/fuel entering the cylinder and others reduce the quantity.

How ever you wish to think about it, if your goal is to increase engine power, then increasing the quantity of air/fuel reaching the cylinders will do the job.

In reality, the physics behind achieving this goal can be very complex, however, a basic understanding can be achieved with some simplifying conditions. So for the following explanations, assume the air running through the intake system is a steady flow and not pulsating. 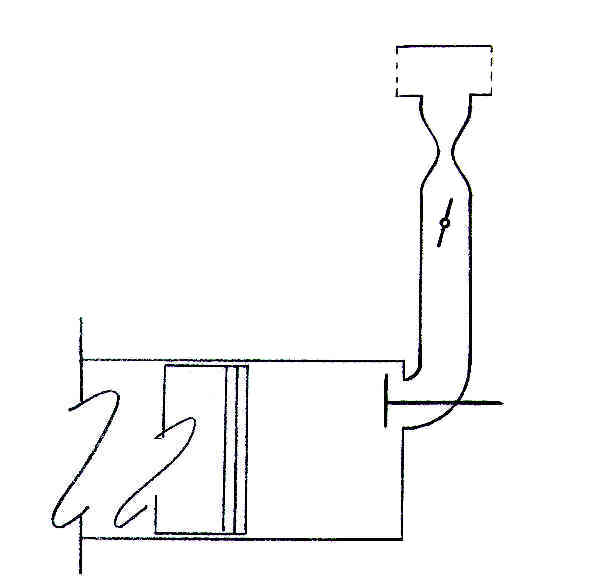 Mechanically, the intake system typically consists of an intake valve, an intake port and manifold runner, a carburetor or throttle body, and it usually has some type of air filter. The illustration above is a representation of such a system. Sometimes it is helpful to evaluate the parts in the order just described because that is what the piston sees as it is trying to draw the air into the cylinder.

INTAKE VALVES
Obviously, if the intake valve is very small in comparison to the cylinder, then it will be hard for the fuel and air to rush into the cylinder. Another item to consider is how wide the valve opens (or how far it has lifted off the valve seat).

However, there is a limit to be reached at which point opening or lifting the valve more really doesn't help much.

To illustrate this condition, think about the gap between the valve seat and the valve's face. As the valve first starts to lift of the seat, this gap is very small. At this point the air is trying to squeeze through a small ring space between the valve and the seat.

A larger diameter valve has a larger ring space and will reach this point of diminishing returns at a lower lift than a small valve.

From this example, you can draw the rule of thumb that smaller intake valves will be more power responsive to an increase in lift than larger diameter valves.

INTAKE RUNNERS
Intake ports and manifold runners are in essence pipes or conduits delivering the air/fuel to the cylinder. If the walls of the runners are very rough and jagged, it causes friction, or a restriction, and it is harder for the air to move down the pipe.

Likewise, if the pipe is too small in comparison to the cylinder, it will be harder for the piston to pull air into the cylinder.

On the other hand, if the intake port is too big and smooth, the quality of the airflow suffers.

Once an engine warms up, however, this hurts high performance. What happens, is the manifold gets hot enough to actually warm the air as it comes through the intake runners. This is why you see many performance manifolds with an airspace between the lifter valley and the bottom of the manifold.

For this same reason, many performance and racing heads do not have a heat riser from the exhaust ports.

Another factor of manifold design affecting performance is the plenum. This is the chamber where the intake runners collect under the carburetor or throttle body.

An open plenum design has a single junction box connecting all of the intake runners. A divided plenum has half of the runners coming into one box and the other half coming into an adjacent box.

With divided plenum manifolds, each cylinder can only draw from half of the carburetor. If you are using a 2-barrel carburetor with this manifold, it means each cylinder would pull air from a single barrel.

CARB SIZE
In the case of a 2-barrel carburetor and a divided plenum, it is very likely that the single barrel is the most restrictive part of the intake system leading to the cylinder.

If you race in a 2-barrel class and wish to modify a stock engine, you are likely to gain more performance with an open plenum manifold than you would by going to larger intake valves.

At the other end of the spectrum, if you have a monster 4-barrel on a stock engine, the carburetor is likely to be oversized in comparison to the intake ports and valves. This can also hurt the performance.

For a carburetor to work its best, it should be balanced with the intake runners and intake valves.

If you have a carburetor that is way too big, a divided plenum manifold may actually improve you engine's performance in comparison to using an open plenum manifold.

As you can see, the relationships between the engine's parts is as important as the individual parts.

In real life, the relationships are more complex than with this steady flow explanation. Rather than fretting about these relationships, just let a program like Engine Shop do the work for you!